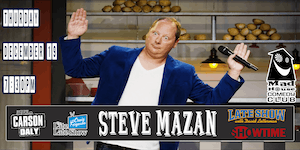 Steve Mazan is one of the most sought after corporate comedians in the country. His ability to be funny, clean AND inspiring has lead to successful shows and keynote addresses for Fortune 500 Companies, small businesses and industry conferences & parties.

​From appearances on late night TV, including the "Late Show with David Letterman," to his Emmy-winning writing for the Ellen Degeneres talk show and multiple inspirational TED talks, Steve offers something for everyone.

​Steve has packed a lot into life. From living aboard a submarine in the Navy, to writing & performing on TV and sharing his uplifting personal story he's compiled quite a resume. He also has an award-winning documentary and authored a biography released by the "Chicken-Soup for the Soul" publishers. But of all Steve has done he's most proud of his 12+ trips to the Mid-East to perform for our troops.