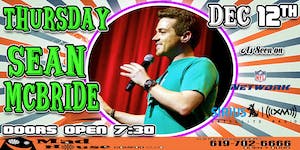 Born in the Mid West, but raised in Western New England, it's no surprise that Sean McBride is now one of the fastest rising comics to come out of Southern California. A well traveled man indeed, but that's part of what helps Sean relate to people no matter where he's performing.

​ ​After "retiring" from the NFL Network in 2009, Sean hit the road, performing at every comedy club, college, casino and dive bar planet earth had to offer. These days he performs regularly around Los Angeles and is the host of 'Cosmic Comedy' at Cosmic Vinyl in Echo Park. He is the host of the 'Halftime Live' Sports Trivia App and a featured performer on the Laugh Bureau comedy channel. Sean can also be seen in the film, "LIVE", streaming now on Amazon Prime.