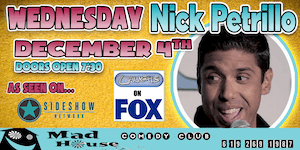 Nick Petrillo is an up and coming comedian who will have you on the floor laughing with his take on dating, work, and life.

Nick was born and raised in Los Angeles County. As a kid he was always a bit of a trouble maker and frequently held the titles throughout school for things such as having the most detentions for rapping Eazy-E lyrics. It was in school that he quickly discovered he was a fast talker and began working in sales at the age of 15. Humor tends to be a great way to get people to relax and open up their wallets, and so Nick advantageously used humor to make sales.

Eventually his love for laughter and making others feel good steered him down a new career path in stand up comedy. As Nick has said, "Seriously, who doesn't love to laugh and feel good? Even the most uptight Mormon appreciates a good dick joke'.

When he initially began comedy it was like Kurt Cobain discovering the best heroin in the world. Now he has a mean habit and refuses to seek help and he's headed down a path causing him to focus on nothing but performing (or "getting his fix" as we say in the junkie biz).

Nick can be seen anywhere from bars to coffee shops, comedy clubs to even a laundromat. No matter where it is, he'll perform there.

​Most notably, Nick has performed at The Comedy Store, The Improv, The Ice House in Los Angeles and other comedy clubs across the country.

He has also been featured on Laughs on Fox, Indie 103.1 FM, and Cal State Long Beach's K-Beach radio.