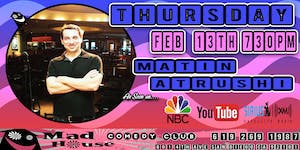 Matin Atrushi’s parents were political refugees from Northern Iraq, forced out by Saddam Hussein’s troops. Matin’s fascination with comedy began at an early age as the family would gather around and watch John Ritter on “Three’s Company” although the young boy’s parents barely spoke English. “Jack Tripper’s comedy was universal. My parents would laugh at his physical humor and antics,” said Matin.

Matin first tried stand-up comedy at the age of 24 in a small coffee shop in Los Angeles and has been at it ever since. He has shared the stage with comedy legends such as Robin Williams and Chris Rock. He is a comedian with a unique perspective into the everyday life of being Middle Eastern in America today.