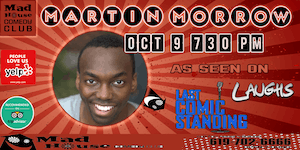 Martin Morrow is originally from Birmingham, AL where he started doing stand-up, improv, and belonged to an award winning sketch/stand-up hybrid "Tubbi and Martin." Martin has performed in clubs, colleges, and festivals all over the country including Atlanta, Austin, Cleveland, Las Vegas, Los Angeles, New Orleans, New York, Philadelphia, and Portland and has worked with some of the top names in comedy from Tim Allen to Katt Williams.

Currently residing in Chicago, IL, Martin is an understudy to the Second City Touring Company and has performed in several shows with Second City as a part of their Outreach & Diversity ensemble. He is part of the 2015 Second City/NBC Bob Curry Fellowship program, a Second City PUMA scholarship recipient, and graduate of The Conservatory. He has put on several one man shows at The Playground Theater and MPaact Theater where within his work he has become known for creating the personas Farty Marty and Mar’son.