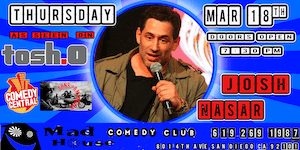 From improv and stand up comedy stages to red carpets, game shows, and radio, for more than a decade comedian Josh Nasar has been performing stand-up. Josh got his first taste of the spotlight as Master of Ceremonies for Penn State Football making crowds of nearly 100,000 faithful follow him throughout the game.

Taking this special skill with him to hosting and comedy stages, Josh has performed to audiences nationally and internationally.

Josh has been seen on FX’s hit show “Sons of Anarchy” and can currently be seen hosting Discovery Networks “What’s My Car Worth”. When Josh is not working in front of the camera he tours the country as a comedian, motivational speaker and relationship expert.