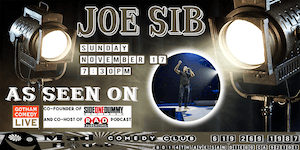 Joe Sib, co-founder and co-conspirator of Side One Dummy Records for over twenty years, has continued to climb up the ranks of the comedy scene. Joe released his first comedy record, Joe Sib Nowhere Near the Top, in April 2017. From the 1980s punk scene to millennium parent, Joe’s comedy takes you on a manic, ride from growing up in the era of “safety last”, and into the present, as he tries to helicopter parent without a license.

In addition to performing stand up at comedy clubs around the country, he is the co-host of the popular parenting podcast, ​Rad Parenting, with advice expert Anea Bogue. The duo, discuss the unpredictable and often terrifying role of modern parenting with a dose of self-deprecating humor. This successful combination has earned them a top spot on the ITunes charts.