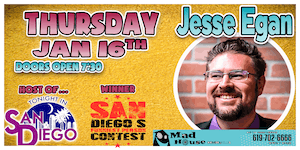 Jesse Egan started doing stand-up comedy after a summer road trip took him from his hometown of Washington DC to the west coast. He was named part of the Best of San Diego at The Comedy Store in La Jolla California and in 2014 Jesse won first place in the San Diego’s Funniest Person Contest.

Jesse currently travels the country with Vicki Barbolak from America’s Got Talent as part of the Trailer Nasty Tour. He is the most recent host of Tonight in San Diego, San Diego’s very own late night variety talk show on CW6 TV. You can see Jesse’s nationally televised spots on KPBS TV and he’s also appeared on Union Tribune TV, Fox Rox TV, Laughs on FOX, and in the documentary film Stage Time.