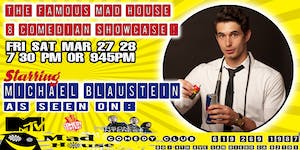 Michael Blaustein is an internationally touring headlining comedian, accomplished actor, and award winning writer. Michael co-hosts a very popular podcast called "Stiff Socks" with Trevor Wallace, that is in the top #100 podcasts on iTunes. He has performed at over 200 colleges worldwide and has been on the Comedy Central on Campus Tour, The College Humor Tour, and The Oddball Comedy Fest. Michael has preformed at prestigious festivals such as JFL 42 and The New York Comedy Festival. Michael can be seen on Amazon Primes original series "Inside Jokes." Michael can also be seen on the last season of CBS’s Person of Interest and has a role in The Lucky Guy, a feature film produced by Spike Lee. He has hosted two pilots for MTV and was a cast member of the last season of MTV's Punk'd. Michael created and developed a Snapchat show for Comedy Central and has sold ideas to CBS and various other major production company's. He was also a comedy pilot finalist in The Austin Film Festival. Michael Co-wrote, Co-directed, and Co-starred in the feature film "Up There" that will be out mid-2020..

Tyson Faifer is best known as the first comedian to ever compete on NBC’s American Ninja Warrior and you may recognize his face from your favorite reality dating shows… most recently on ABC’s The Proposal. Tyson’s act has been described as smart, witty, and a ball of energy, covering topics such as his love of the 90’s, growing up on the Mexican border, and the struggles of living in your early to mid/late thirties. His first comedy special was recorded in 2017 for Ride TV and can be seen by tens of people who actually have that channel. Now living in Los Angeles, Tyson has been touring the country and is on his way to a city near you. In the meantime, you can still find him on reruns of WeTv’s Million Dollar Matchmaker, Fox’s Love Connection, The Steve Harvey Show, Ford Mustang Speed Dating Viral Video, Judge Hatchett, and SoulPancake’s Date My Dog.

Supporting role “Clay” in the independent film “All for Amy” 2014

Dallas/Fort Worth Comedy Ambassador for Chevrolet 2012 & 2013

Fanto Frunze is an American novelist, poet, comedian, actor, and screenwriter. He speaks several languages and writes about various topics and peoples that might not be as appealing to the mainstream channels. Fanto is also a UCLA graduate and law school dropout. His first published novel "In A Sun" was the result of having witnessed the murder of his friend who had been a writer as well. It is dedicated to those who did not get the chance to tell their own stories. He is currently working on 2 books titled "Sex, Drugs, & Renting Cars: A Story of Corporate Glory" and "Stories from Strangers That Might Change Your Life." Fanto lives in either Brooklyn or Silverlake with his dog Jeko.

Audrey Stewart is a stand-up comedian/Actress based in LA, who has performed and headlined at venues including The Laugh Factory LA, Laugh Factory Vegas, Hollywood Improv, Ice House, and more. She has hosted for comedians such as Arsenio Hall, Dane Cook, Adam Corolla and has shared the stage with Tiffany Haddish, Sherri Shepherd, and more! Audrey studied at The Groundlings School, and prior to moving to LA, she completed all levels of IO Chicago and was a member of the Indianapolis Comedy Sportz team. Audrey’s stand up clips have accumulated over 7,000,000 views allowing her to gain a loyal following. Previously, Audrey worked at Power 106, and was quickly promoted to on-air segments and on-air commercials. Audrey can be seen on the brand new NBC Series “Bring the Funny” as well as the Facebook Watch series “Fuzzballs”.