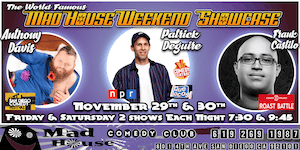 Patrick started performing stand up after losing a significant amount of his vision because of an eye disease called optic neuritis and discovering laughter to be self therapeutic. Soon after getting started, Patrick won the Improv/ Harrahs National Comedy Club Talent Search. Patrick has appeared on national television numerous times including Comedy Central and 'Que Loco' on Galavision among others. He has been heard on the national syndicated radio show 'The Bob and Tom Show' and NPR. Patrick has toured/ performed with such comedians as Dave Attell, Tommy Davidson, George Lopez and Paul Rodriguez. Besides headlining at the top comedy clubs throughout the United States, he has also performed for the U.S. troops overseas in Bahrain, Cuba (Guantanamo Bay), Djibouti, Dubai, Guam, Honduras, Iraq, Japan and Korea.

Patrick's material includes the advantages and disadvantages of living in a world with limited vision and the challenges that arise from it. Patrick discusses the obstacles of relationships/ marriage and raising four children. Patrick addresses an assortment of other topics that are insightful and hilarious.He’s also entertained our troops in South Korea and Japan. What a guy! It’s no wonder he won the title of "Wittiest" in Franklin County High School’s 2009 Yearbook. He even wrote this bio himself. And he’ll have a margarita with you if you play your cards right.

Frank is most recently the Winner of ROAST BATTLE 2 War of the words. He is the Peoples Champ.

Frank Castillo was born and raised in east-side San Jose, California. He began his comedy career as a host and sketch writer for Pechanga Resort and Casino in Temecula, California. Today, he resides in Los Angeles with his girlfriend and cat.

Since beginning stand-up comedy over 6 years ago, he has been able to perform across California and work with comedians such as Steve Trevino, Adam Ray and Dave Chappelle. He works and frequently performs at the World Famous Comedy Store, his home-away-from-home, where he shares the stage with his favorite comedians Louis C.K., Bill Burr, Joe Rogan and Tom Segura.

Frank has been a co-producer and Roaster for Roast Battle since it began as a small, late night open mic 4 years ago. He is thrilled to be able to be a part of Comedy Central’s vision of the show he loves so much.

Anthony Davis is the Jewel of the South, born in the woods of North Carolina, and raised by packs of PBR. Anthony later moved to Los Angeles only to be disappointed in the lack of gravy. A big personality tackling topics such as marriage, food, and understanding of the world, Anthony has traveled all around the world entertaining from churches to the troops. He recently won the 2019 San Diego Comedy Festival, Opened for Pauly Shore and was passed as a regular at the Laugh Factory Hollywood

A Southern gentleman off-stage and a comedy powerhouse on, he connects with audiences with his big personality and smiles. Anthony always has the audience feeling like it's more than just a comedy show; it's an experience.