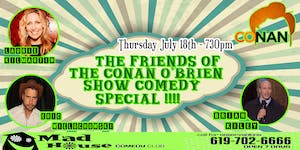 Laurie Kilmartin has been doing standup since 1987 and has appeared on CONAN, Jimmy Kimmel Live, and Comedy Central. Her Seeso special "45 Jokes About My Dead Dad" made Vulture's list of Top Ten Comedy Specials of 2016. She's written two books, Shitty Mom (2012) and Dead People Suck (2018). She is currently a writer for CONAN on TBS, and previously wrote for Tough Crowd w/Colin Quinn (Comedy Central) and The Late Late Show with Craig Fergusion (CBS). She has appeared the Montreal Comedy Festival as a New Face and, 12 years later, as a Master.

Brian Kiley has appeared several times on “The Late Show with David Letterman”, “The Tonight Show with Jay Leno” and “Late Night with Conan O'Brien”. He performs regularly at clubs in L.A.

He has been a staff writer for Conan O'Brien since 1994 and is currently the head monologue writer. He has been nominated for 16 Emmy Awards and he is the winner of the 2007 Emmy Award for Writing in a Comedy/Variety Series.

Much to his surprise, he was even featured in the New York Times Sunday Crossword Puzzle. (He has never completed said puzzle.)

He has had a recurring role on the Cartoon Network's "Delocated" and has been on "The Bonnie Hunt Show", “Comedy Central Presents”, “Dr. Katz Professional Therapist”, “The CBS Morning Show”, “Spotlight Café”, “Caroline's Comedy Hour”, “Comedy On The Road”, the Showtime Comedy Club network, the TBS Conan writer's special and “An Evening at the Improv”.

Eric Wielo is a stand-up comedian, improviser, and writer originally from Milwaukee, Wisconsin. He's been a member of the CONAN (TBS) production staff for the past eight years and has helped to create over 1200 episodes of television. His TV credits include: Saturday Night Live, The Tonight Show with Jimmy Fallon, Late Night with Seth Meyers, The 75th Annual Golden Globe Awards, The 70th Annual Emmy Awards, The Break with Michelle Wolf, The Tonight Show with Conan O’Brien, The Pete Holmes Show (TBS), Empire's White Hot Christmas Special (FOX), Deon Cole's Black Box (TBS) and Disney's Annual Thanksgiving and Christmas Holiday Specials (ABC). He recently performed on the TBS sponsored Main Stage at the New York Comedy Festival and has also performed in the LA and San Francisco Comedy Festivals. He's a proud graduate of The Second City Conservatory and iOWest's sketch and improv programs.