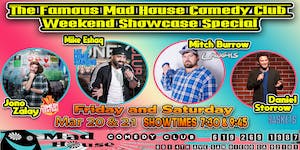 MITCH BURROW placed second in the 2015 Seattle International Comedy Competition and was the winner of the 2015 Trial By Laughter Competition.

Mitch is a Marine Corps Veteran that served in Operation Iraqi Freedom in 2003. He then started a career in manufacturing before realizing that it sucked. Now, Mitch has found his true calling in acting silly on a stage in front of strangers on a nightly basis.641_8x10

Mitch has appeared on 6 episodes of the Fox Show Laughs where he was listed as “The Next Big Thing” on his first appearance. He has been heard on the Bob and Tom show which is syndicated to over 100 cities as well as overseas on the Armed Forces Network. Mitch performed in the Great American Comedy Festival (a tribute to Johnny Carson in his hometown), was a semi-finalist in the Laughing Skull Festival, and has performed in many other festivals such as Bumbershoot in Seattle, Laughing Derby in Louisville, and the Rocky Mountain Comedy Festival in Salt Lake City.

Mike Eshaq has a unique angle in my comedy being Middle Eastern, raised Muslim and served as a United States Marine. Some of his credits include being on ‘Detroiters’ on Comedy Central and ‘Grace and Frankie’ on Netflix. Also, Mike placed as a finalist in seven out of the eight competitions for The World Series of Comedy!

Daniel Storrow started doing stand up comedy in the early part of the 21st century. He's performed all over the US and currently lives in Los Angeles. He has made a few TV appearances including Baskets, and often performs with Louie Anderson in Las Vegas. A trained actor and San Diego native, Daniel is known for his quick wit and intelligent musings on everyday life.