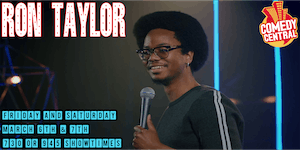 Ron Taylor is a stand-up comedian, writer, and actor who hails from Detroit. This summer he performed at the prestigious Just For Laughs Festival in Montreal as part of Kevin Hart’s talent showcase LOL LIVE. Ron has been featured on Comedy Central, B.E.T’s Apollo Live, Fox TV’s Laughs and on the All Def-Digital network. He performs comedy in clubs all over the world.

Jeff Horste likes to cover lighthearted topics such as book bags, candy corn, and racial inequality. His comedic ability is blessed by whatever God you believe in, so as to not offend you. Kevin Hart recently hand picked Jeff twice to showcase his comedic talents on Comedy Central. He recorded a half hour special on “Kevin Hart Presents: The Next Level” and was featured on “Kevin Hart Presents: Hart Of The City”. He appeared on the Fox TV show “Laughs”, and performs in some of the top clubs in the country, working with comedians such as Demetri Martin, Mike Epps, and Michael Ian Black. He has performed in the Limestone Comedy Festival, Atlanta’s Laughing Skull Comedy Festival, and the Boston Comedy Festival. Possessing the rare versatility to connect with diverse audiences. Jeff performs in theaters, living rooms, nudist colonies, and as the token white man.

Dallas got his start in comedy by writing and performing with the award-winning sketch comedy group The Honking Geese. After the groups demise Dallas turned to music and toured the country while releasing three records with the band Bad Credit. Dallas was asked to write and perform for the pilot of Yo! Gabba Gabba! Which, turned into a regular role on the show. Since 2004, Dallas has been performing and writing sketch comedy at the Upright Citizens Brigade Theatre in LA and NY, having recently performed in Jurassic Park the Musical! Dallas joined the ranks of stand up comedy in 2009 and has since been featured on several shows in San Diego, Los Angeles and Las Vegas. Dallas currently writes about Baseball for FanSided.com as well as writes and performs for the all-new The Aquabats! Super Show! on the Hub Network. Dallas is a Champion of the San Diego's Funniest Person Contest.