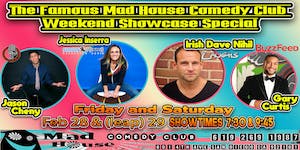 David is the author of the best-selling book Do You Talk Funny? and the Founder of FunnyBizz Conference. His work has been featured in Inc., Lifehacker, The Huffington Post, Fast Company, Entrepreneur, Forbes, NPR, The Wall Street Journal,The Irish Independent, TV3, Newstalk, TED and The Irish Times.

Gary Curtis is a Los Angeles based comedian, actor, and writer. Gary's comedy covers an array of topics ranging from relationship troubles to family business to conspiracy theories about your favorite holidays.

Jessica Inserra is an LA-based stand-up comedian whose irreverent humor explores, among other things, themes from her life as a gay woman growing up in a colorful New York Italian family. Jessica recently commemorated 25 years of being out, having burst through the closet doors at the tender age of 14. Now she can be seen performing her unique brand of brash, edgy comedy at The Comedy Store, as well as other venues in and around Los Angeles, Las Vegas, and Seattle. Originally from New York City, Jessica is a classically trained actress and singer who began her creative education as a child in Manhattan’s Neighborhood Playhouse School of Theatre. She went on to attended Laguardia High School for Performing Arts, and continued her training at prestigious arts institutions such as Stella Adler, T. Schreiber Studio, and The Royal Academy of Dramatic Art in London. She is currently working on her own stand-up special entitled, Jessica Inserra, Pretty Gay.