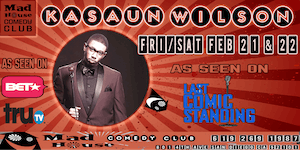 You’ve seen him performing on stages from NBC’s Last Comic Standing to Broadway but there’s more to this Jersey kid. Kasaun Wilson began his comedy career during his time at Howard University with the urging of his professor, the legendary Al Freeman Jr. Since that time, he has been featured on platforms as recent as TruTV’s Laff Tracks, TVOne’s NewsOneNow with Roland Martin, and too many more to name! He’s performing in colleges, churches, theaters, and arenas around the country including the Comedy Store in Los Angeles, THE Ohio State University, Gotham Comedy Club in New York, and the Kennedy Center, and back where he started comedy, the DC Improv. He’s opened up for acts like Donnell Rawlings (Chappelle’s Show), Michael Blackson (Friday After Next), and Griff (Get Up Mornings with Erica Campbell). He’s currently co-hosting “YouthFul Praise with JJ Hairston” on Rejoice Musical Soul Food Network and creator of the Generational Curse Breaker brand. At his core, he’s just Tiffany’s husband and still that sheltered church kid from Jersey City, NJ!

Alfonso Ochoa was born and raised in a working class region of Southern California called the Inland Empire. Over his nearly decade long comedy career he honed his skills as comedian and is known for his clever writing and dynamic stage presence.

Through his act you will get to know Alfonso Ochoa as a white washed Mexican, divorcée, blackjack dealer and ex fat guy. Alfonso has performed at comedy clubs across the country and was featured on national television twice on "Laughs" on Fox.

Tre' Stewart found Comedy pretty early in life. While other kids were watching cartoons he was watching Saturday Night Live, writing jokes and doing impressions preparing himself for his inevitable career in Stand Up Comedy. Tre' first picked up the mic 9 Years ago at the tender age of 16 and never looked back. Stewart possesses a relaxed, laid-back comedic delivery where the punch lines come in more of an intimate and conversational style of someone sharing a funny story over the water cooler at work or on the basketball court. The Detroit Native left the motor city in 2012 to pursue his dreams of performing comedy in Los Angeles. Just 6 months after moving to LA he was taken in by the World Famous Comedy Store and has been honing his craft there and various other clubs in and around the LA area ever since. Stewart made his television debut in April performing stand up on the show Laughs on Fox.

Veronica Kwiatkowski is a stand-up comedian and writer based in Los Angeles, CA. She has performed at The Comedy Store, the Hollywood Improv, the Laugh Factory, Flappers Comedy Club, and other venues around Southern California. She also hosts a monthly show, Funny AF, in Santa Monica, CA. Veronica’s comedy is a unique blend of wit, sarcasm, and depravity, weaving together quick one-liners with punchy stories about her life, family, and the many hours she spends sitting at a desk job in Corporate America. Veronica is passionate about making people laugh and is a guaranteed crowd-pleaser for all audiences.

Brian Apprille is a stand-up comedian, voice actor and motivational speaker who performs across America for comedy clubs, businesses, churches, and any audience who wants to laugh or hear an inspiring story.

Brian, a clean comic, has shared the stage with some of comedy’s biggest names and appeared on NBC, Sprint TV and AOL’s “Comedy Spotlight.” He is also the winner of the 2016 Clean Comedy Festival and the 2019 CCA Comedy Contest. Critics describe him as “brilliantly entertaining,” and “coast-to-coast funny!” Brian is best known for his high-energy comedy and impressions; he has been dubbed “The Man with A Thousand Voices” and throughout his performances slips between Homer Simpson, Peter Griffin, Alan Rickman and hundreds of other characters both real-life and animated.

Brian’s career took a turn for the serious in 2009 when he developed facial paralysis as a result of a rare disease called Ramsay Hunt Syndrome. He found humor in the midst of his challenges and got back on the stage after over a year of fighting Ramsay Hunt Syndrome’s debilitating symptoms.

Now an activist and a comic at once, Brian raises awareness of facial paralysis and inspires hope in fellow suffers with plenty of belly-laugh healing along the way. He founded San Diego’s first facial paralysis support group and has appeared on NBC’s Inspiring San Diego to share his story. You can listen to the stories of notable facial paralysis survivors like Mary Jo Buttafuoco and WWE Hall of Famer Jim Ross on Brian’s podcast, Unique Smiles: The Facial Paralysis Podcast.

Brian now gives inspirational speeches to corporate, church and a variety of other audiences all over the country. He owns a comedy company, Encore Comedy, headquartered in San Diego, California.