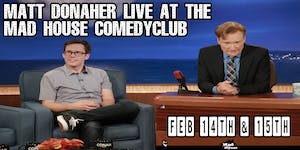 Matt has performed on CONAN multiple times. Matt was staffed on Demetri Martin's show for Funny or Die, served as head writer for Fuse TV's Uproarious, served as co-head writer for The Comedy Network’s All Access Live and wrote and provided voiceover for Jonathan Katz's series Explosion Bus. Matt has written jokes for comics such as Natasha Leggero, Mike Birbiglia, Wyatt Cenac and Moshe Kasher.

Matt had the honor of being a New Face in the prestigious Montreal Just For Laughs Comedy festival where his performance led to him being part of Best of the Fest and selected to perform on a Gala special taped for the CW hosted by Howie Mandel starring Russell Peters, Tom Papa, Iliza Shlesinger, J.B. Smoove and more. Read about Matt's highlight performance here.

Matt is the winner of the 38th annual Seattle International Comedy Festival. A month long festival taking place all over Washington in which he beat out 31 amazing performers.

Comedy Central named Matt one of their "Comics to Watch" and the Boston Phoenix named him the best comedian in Boston.

Matt co-hosts a podcast called Boo! You can check it out wheverer you get podcasts.

Matt ran a monthly show at Meltdown Comics in Los Angeles with his co-host Caitlin Durante called Luck of the Draw. It was named one of the best secret comedy shows by Thrillist.

Hailing from Chicago, IL, Taquita Love is just what the doctor ordered. With her expertise as a Registered Nurse, she administers comedic relief for the soul. She has been featured on Funny or Die and Laughs on FOX. The graduate of Second City LA and UCB LA is sure to leave you wanting more.

Head spinning in a caffeinated fugue, Kevin Bennett once found himself shredding down a Martian ski slope with a thousand irate Nephilim howling in his wake. On the way, he rescued twenty damsels, had lunch, and fully calculated Pi. In close company, he goes by “Bennett,” but he moonlights as an accordion-bearing comedian with an eye-patch and a beret, who goes by “French Accent" (the first initials of Francois Raphael Edgar Norbert Celestine Hebert Absalom Correntine Clement Emmanuel Nathaniel Tellus, IV). He entertains any crowd, be it young, old, clean or "adult". His technique involves regular crowd participation and a musical element with no contemporary parallel

A steady fixture in the Southern California comedy scene, Bruce Jingles was born to be a showman. His comedic brand blends just the right amount of wit, impersonation, and essential timing, making him a hit in front of any crowd. A man of many hobbies, Jingles captures a crowd with a propensity for pot, a love of comic books, and a soft spot for storytelling. Whether he’s impersonating drunks, juxtaposing stereotypes, or recounting his various run-ins with the law, Jingles’ material is endearingly eloquent and rife with intelligence. Jingles has also done considerable work in radio, participating in shows on KCAA NBC-AM, as well as several established podcasts, adding another layer to his already engaging performance. Jingles has taken his compelling act all over the country, as well as overseas, entertaining troops as part of several USO tours. Jingles’ expansive body of work has been showcased on networks such as ABC, VH1, NUVOTV, and two Showtime specials. He appeared in the 2008 dark comedy,” Driving Bill Crazy”, has even appeared on TMZ. Check out his LIVE 1st LIVE comedy album “Bruce Jingles: Comic” by RBC Records on iTunes, Pandora or Spotify.

Joe Carl Abousakher grew up in a multi-cultural household (half Palestinian-Arab, half Country Bumpkin-White) in the middle of nowhere (McEwen), Tennessee where he raised sheep and chickens there. He killed a lot of those sheep (for food, not fun), and ate all the unborn babies of those chickens (eggs). Does that sound weird? Screw you, dude. You're weird.

Now he now raises his preteen step daughter in West Hollywood, California, and no - he's not that great at parenting. But he does have a pretty unique perspective on the world, and he's conceited enough to think the world wants to hear him rant about it.

He was a semifinalist on NBC's Stand Up Diversity Showcase in 2016 and 2017, a finalist in The Funniest Comic In LA 2017, and has been a featured act at the 208, Golden Spike, and North Texas comedy festivals. He has featured for the likes of Dana Gould, TJ Miller, and Margaret Cho. He loves performing all around Southern California, but he'd love to travel the country to perform for YOU!

ALSO - Joe hosts THE HOMETOWN HEROES PODCAST - a biweekly podcast where he invites funny people over to talk about the places they grew up. You can find it on iTunes, Stitcher, or anywhere else you listen to those things.