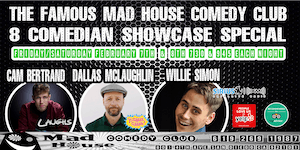 Dallas got his start in comedy by writing and performing with the award-winning sketch comedy group The Honking Geese. After the groups demise Dallas turned to music and toured the country while releasing three records with the band Bad Credit. Dallas was asked to write and perform for the pilot of Yo! Gabba Gabba! Which, turned into a regular role on the show. Since 2004, Dallas has been performing and writing sketch comedy at the Upright Citizens Brigade Theatre in LA and NY, having recently performed in Jurassic Park the Musical! Dallas joined the ranks of stand up comedy in 2009 and has since been featured on several shows in San Diego, Los Angeles and Las Vegas. Dallas currently writes about Baseball for FanSided.com as well as writes and performs for the all-new The Aquabats! Super Show! on the Hub Network. He likes Italian food.