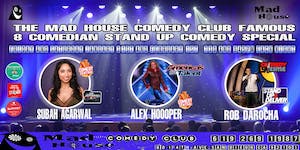 Alex Hooper is a stand-up comedian, actor and professional roaster. He delights crowds by blending dark humor with silly positivity. His joke writing is clever and fearless. Onstage he bursts with energy. Alex shines just like his sparkly wardrobe. He’s headlined clubs all over the world. And whether it’s an audience of 11 or 11,000, Alex leaves comedy goers begging for more.

Alex is best known as the America’s Got Talent comedian who infamously roasted the judging panel. He’s the only contestant to ever get a “yes” from Simon Cowell and a “no” from the rest of the judges. His AGT performance has over 50 million total online views.

As part of his never ending quest to spread love and joy, Alex releases a weekly podcast — Achilles’ Heel. This podcast pushes guests outside of their comfort zone. Alex tackles tough topics like social anxiety and sex addiction with humor and grace.

To say Alex is a serious pug lover is an understatement. For 2018 he created The Pug Yoga Calendar to raise funds for pug rescue: Pug Nation of LA. Ellen Degeneres spotlighted the sold-out 2018 Pug Yoga Calendar on The Ellen Show.

Alex is the creator of CRAVE — an immersive comedy and dance music experience.

Funny Or Die named him one of the 15 Funniest Comics to Follow.

Subhah Agarwal has brought an honesty to her comedy that is refreshing, and at times a bit disturbing... but in a good way. Trust me. Currently, Subhah is writing for "The Jim Jefferies Show" on Comedy Central. She has previously written for "Comedy Knockout" on TruTv, and on the pilot for "50 Central." You can also catch her jokes live at stand up comedy clubs across the country. If you don't want to leave your couch, you can see her appearing on season three of HBO's "Westworld", as Ichtaca on TruTv's sketch comedy "Friends of the People", and as herself on MTV2, Comedy Central, and Gotham Comedy Live.

Jamario McClain stand up comedy shows off his charismatic delivery and very high energy. Every time he touches a stage he's a comedic force to be reckoned with. Jamario brings variety of comedy to the masses. He does clean comedy shows at hospitals and nursing homes around Los Angeles and Orange County. You can see him performing regularly at all the major clubs in Los Angeles including the Laugh Factory, The Comedy Store and the Ice House Comedy Club. Jamario has appeared in various TV and Film projects, with his most recent big screen role being in the Gary Gray N.W.A film "Straight outta Compton" released in August 2015. You can also catch Jamario on season 3 of the hit stand up comedy series 'Laughs' which airs on FOX and Hulu.

Peter Kim is a writer and stand up featured at Oddball Fest, SF Sketchfest, Zanies, Laugh Factory, American Comedy Club, Comedy Store La Jolla, toured with Bobby Lee, will be headlining the 2020 Portland Queer Comedy Festival and produces/hosts Suddenly Stand Up (monthly @ UCB Franklin). He wrote and performed The Second City's 40th etc revue (Jeff Nominated) and wrote for the CBS Diversity Showcase 2019 and 2020. His TV creds include: Curb Your Enthusiasm (HBO), SHRINK (NBC) and voice a couple characters in the upcoming animated film Spies in Disguise (DISNEY) with Will Smith and Tom Holland.

Rob was born in New Orleans, Los Angeles and was raised by a single mom. Contrary to popular belief and unfounded assumptions, he is NOT white. He is actually half El Salvadorian and half Brazilian.

Rob is bi-lingual which means that Spanish is his first language and English isn’t. He didn’t know a word of English until he got to the second grade and from watching countless hours of Saturday Morning Cartoons with Wile E. Coyote being one of his favorites.

Soon after, Rob graduated from Saturday-Morning-Cartoon-Watching to a full-fledged high school student at Notre Dame Private School. Shortly after, he went to San Francisco State University to study film. It was there that he learned that not only does he have the talent to make people laugh their butts off, but more importantly, He is doing EXACTLY what he loves!

While taking acting classes in the evening and auditioning during the day, he become a substitute teacher for 2 yrs and then taught Special Ed for 3 yrs.

He began his stand-up comedy career in his hometown of Los Angeles and has emerged as a favorite at the Ice House in Pasadena, Laugh Factory both in Los Angeles and in Long Beach, and at the Improv in Los Angeles. He’s also performed in Orange County at various comedy clubs. He was selected to be part of the 2007 Latino Laugh Festival’s Diamonds in the Rough Show featuring top headliner comics such as Carlos Mencia and Johnny Sanchez.

Rob has a very strong stage presence and great comedic timing. He performs all over the Los Angeles and Orange Country area and currently has two national commercials running, so you may have seen him on TV. He shot a sports pilot, Talking Trash, with Greg Wolf, a sports anchorman on Fox Sports West. He recently performed on Standup and Deliver on NUVO TV.