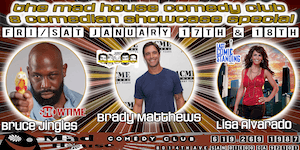 Brady Matthews’s high energy and witty personality make him standout amongst other young comedians in the country today. Born in Boston and raised in Chicago, Brady grew up making his friends and family laugh, catapulting him into becoming the standup comedian he is today. After winning the Uncle Clyde’s Comedy Competition at the Ice House in 2007, Brady knew being on stage and making people laugh was what he is meant to do. He was invited to the Seattle Comedy Competition as well as the Calgary Comedy Festival and headlines all around the country. You can catch Brady performing at his own show Top Secret Comedy at the Hollywood Improv, or working out new material at the Comedy Store. When Brady isn’t on stage, you can catch him on the new webisode series “Clean Break” or in reoccurring roles such as E!’s “Reality Hell”, “Always Sunny in Philadelphia”, “Better Off Ted”, “CSI: New York”, and “How I Met Your Mother”. He has also been featured on TruTV’s “TheSmokingGun.com”, and Jimmy Kimmel Live.

Lisa Alvarado, The Latin Queen of Comedy, is Tina Fey meets Sophia Vergara. Lisa brings the funny with clever wit and a sassy fun attitude; relatable and quirky, in that Ellen Degeneres way, using her own life as the punch line. Lisa specializes in targeting her humor to her audience!

Born to Peruvian parents in Chicago, Lisa knew she wanted to be a Stand up comedian at an early age.

She writes all her own material and enjoys sharing her gift of laughter with audiences around the world, including several overseas shows for the Troops. Lisa is a National Headliner to many theatres, clubs, colleges and corporate events. TV appearances include: NBC's "Last Comic Standing", Nick at Nite's "Funniest Mom in America 2", "Comics Unleashed" with Byron Allen, "Stand Up in Stilettos" on TV Guide Network, NuvoTV, and many more. Lisa also played Paul Rodriguez's sidekick on 20 episodes of "Mis Videos Locos" on the MTV Network.

A steady fixture in the Southern California comedy scene, Bruce Jingles was born to be a showman. His comedic brand blends just the right amount of wit, impersonation, and essential timing, making him a hit in front of any crowd. A man of many hobbies, Jingles captures a crowd with a propensity for pot, a love of comic books, and a soft spot for storytelling. Whether he’s impersonating drunks, juxtaposing stereotypes, or recounting his various run-ins with the law, Jingles’ material is endearingly eloquent and rife with intelligence. Jingles has also done considerable work in radio, participating in shows on KCAA NBC-AM, as well as several established podcasts, adding another layer to his already engaging performance. Jingles has taken his compelling act all over the country, as well as overseas, entertaining troops as part of several USO tours. Jingles’ expansive body of work has been showcased on networks such as ABC, VH1, NUVOTV, and two Showtime specials. He appeared in the 2008 dark comedy,” Driving Bill Crazy”, has even appeared on TMZ. Check out his LIVE 1st LIVE comedy album “Bruce Jingles: Comic” by RBC Records on iTunes, Pandora or Spotify.

A filipino-american stand up comedian born in french canada with a backwoods, white boy name.