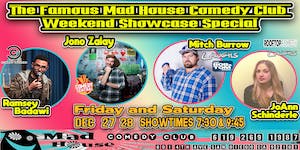 iCal
Google
It's the Famous Mad House Comedy Club Showcase Special starring one of our favorites Mitch Burrow from Laugh on Fox, The Bob and Tom Show!

It's the Famous Mad House Comedy Club Showcase Special starring one of our favorites Mitch Burrow from Laugh on Fox, The Bob and Tom Show! Also performing on this show: Jono Zalay as seen on Comedy Central. JoAnn Schinderle from Rooftop Comedy and Laughs of Fox. Ramsey Badawi from Comedy Central. And, Mad House fav's Jimmy Callaway, Rachel Dee, and Hector Lara.

MITCH BURROW placed second in the 2015 Seattle International Comedy Competition and was the winner of the 2015 Trial By Laughter Competition.

Mitch is a Marine Corps Veteran that served in Operation Iraqi Freedom in 2003. He then started a career in manufacturing before realizing that it sucked. Now, Mitch has found his true calling in acting silly on a stage in front of strangers on a nightly basis.641_8x10

Mitch has appeared on 6 episodes of the Fox Show Laughs where he was listed as “The Next Big Thing” on his first appearance. He has been heard on the Bob and Tom show which is syndicated to over 100 cities as well as overseas on the Armed Forces Network. Mitch performed in the Great American Comedy Festival (a tribute to Johnny Carson in his hometown), was a semi-finalist in the Laughing Skull Festival, and has performed in many other festivals such as Bumbershoot in Seattle, Laughing Derby in Louisville, and the Rocky Mountain Comedy Festival in Salt Lake City.

JOANN SCHINDERLE is a Stand Up Comic, Actress, Writer, and live show Producer living in Los Angeles by way of Portland, OR, but who will never let you forget her sturdy MidWestern roots.

Named Portland's Funniest Person’17 in the Willamette Week as voted by Portland comedy peers and local industry heads, as well as being listed as an ‘Undesputable Genius of Comedy’ by the Portland Mercury; Schinderle has a relatable yet snarky storytelling style that will make you feel like she’s your favorite best friend letting you in on a dirty little secret. Also trained as an improvisor through courses at Second City Training Center- Chicago and Curious Comedy Theater, JoAnn creates big characters and will “yes and” the shit out of you.

Schinderle’s debut album, ‘Dark Jeans’ was released on Comedy Dynamics in Aug 2019 and sat at #1 on iTunes for the week of it’s release. Schinderle wrote ‘Dark Jeans’, which is an entire album premised of menstruation jokes, as a middle finger to the notion that “period jokes aren’t funny”. On the contrary, Schinderle tours the hour across the country laughing at the stigma of female menstruation and raising period products as donations to local women’s shelters.

JoAnn has appeared on Laughs TV, VICE, Rooftop Comedy, Fight Stigma Web Series, and is a contributing writer for Laugh Staff. As a SAG-AFTRA Actress, JoAnn has landed principal roles in both national and local commercials. As a comedy producer, Schinderle curated, hosted, and produced as a podcast a weekly live show called ‘Control Yourself: A Showcase of Funny’ that was featured as ‘Top 5 PDX Comedy Showcases to Watch’ for all 4 years it’s running; Paste Magazine even recognized CY as a Portland entertainment destination. Episodes of Control Yourself can be found on Soundcloud here.

She has high hopes of landing her dream job of writing inspirational quotes into all of morning after pill product packaging.

Jimmy Callaway is a stand-up comedian living in Los Angeles, California. He has co-produced shows and sketches, done some festivals, and various other crimes against laughter. You can purchase his first book, a superhero/gangster novel "Lupo Danish Never Has Nightmares" on Amazon.