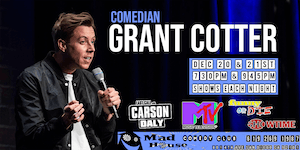 Grant Cotter burst onto the comedy scene with his eclectic brand of humor, quick wit and rapid-fire delivery. His wild off-the-cuff style and attitude have made him a crowd favorite at comedy clubs across the country.

Grant was one of the break out stars of MTV's hidden camera prank show ‘Jerks With Cameras' and was recently profiled on NBC’s ‘Last Call with Carson Daly’. In 2014 he was selected to perform on all 22 dates of Funny or Die’s Oddball Comedy tour alongside Louis CK, Sarah Silverman, Bill Burr, Amy Schumer and Aziz Ansari. Most recently Grant was featured in the award winning documentary 'Dying Laughing' on Showtime.

​Currently he is developing a one hour dark comedy series with Sony Pictures Television and Narrator Entertainment.

Grant resides in Los Angeles where he regularly performs at The Laugh Factory and The Improv.

Nolan is a regular performer at the World Famous Hollywood Imorov and is a feature stand up comedian who tours all over the country. He's been on ABC's "American Housewife" and was the lead in the 2017 Esurance "Shark Week" Campaign.

Joe Sib, co-founder and co-conspirator of Side One Dummy Records for over twenty years, has continued to climb up the ranks of the comedy scene. Joe released his first comedy record, Joe Sib Nowhere Near the Top, in April 2017. From the 1980s punk scene to millennium parent, Joe’s comedy takes you on a manic, ride from growing up in the era of “safety last”, and into the present, as he tries to helicopter parent without a license.

In addition to performing stand up at comedy clubs around the country, he is the co-host of the popular parenting podcast, ​Rad Parenting, with advice expert Anea Bogue. The duo, discuss the unpredictable and often terrifying role of modern parenting with a dose of self-deprecating humor. This successful combination has earned them a top spot on the ITunes charts.