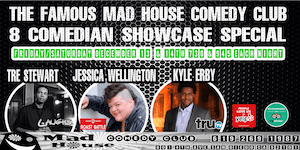 It's the Famous Mad House Comedy Club Showcase Special starring Jessica Wellington as seen on Comedy Central and more! With Kyle Erby from The Tonight Show. Tre Stewart as seen on Laughs on Fox.

Jessica is originally from North Carolina but started comedy at the Sacramento Comedy Spot after serving 6 years in the Air Force. She then moved to Los Angeles where she opens for Iliza Shlesinger. She has shared the stage with the likes of Joe Rogan, Ron White, Chris D'Elia, Ali Wong and many more. Recently Jessica was featrured on Comedy Central's new hit show Roast Battle.

Kyle Erby is known as that guy from the Progressive “Man Cave” commercials. He can be heard daily on the internationally syndicated radio program, Sheryl Underwood Radio, and weekly on The MRA Podcast with Kyle & Kamal. He won Joke of the Day honors on TruTV’s Laff Mobb’s Laff Tracks for his stand-up performance “Black Folks Stick Together.”

Kyle is a MUST SEE for stand-up comedy fans. He is originally from Rialto, California in the IE (The Inland Empire, 60 miles east of LA), and was called "The IE's Funny Man" by the SAN BERNARDINO SUN and the INLAND VALLEY DAILY NEWS. The papers praised him for his ability to mix written material with improvisation to deliver a "custom show" to his stand-up comedy audiences. Kyle's specialty is breaking down relationships from his mannish point of view.

He started in show business as an intern at “The Tonight Show.” After being told by Jay Leno that he should try stand-up, Kyle left the Tonight Show to pursue his own career.

Kyle finished in the top 25 at the Boston Comedy Festival, did Skull Fest in Atlanta, The Highlarious Comedy Festival in Seattle, The World Series of Comedy in Las Vegas, and was a semifinalist for NBC’s Stand-Up for Diversity in New York city. He also finished in the top 6 out of 9,100 in the Austin Film Festival for a spec he wrote. Kyle is a paid regular at the Comedy and Magic Club in Hermosa Beach, Ca.

Tre' Stewart found Comedy pretty early in life. While other kids were watching cartoons he was watching Saturday Night Live, writing jokes and doing impressions preparing himself for his inevitable career in Stand Up Comedy. Tre' first picked up the mic 9 Years ago at the tender age of 16 and never looked back. Stewart possesses a relaxed, laid-back comedic delivery where the punch lines come in more of an intimate and conversational style of someone sharing a funny story over the water cooler at work or on the basketball court. The Detroit Native left the motor city in 2012 to pursue his dreams of performing comedy in Los Angeles. Just 6 months after moving to LA he was taken in by the World Famous Comedy Store and has been honing his craft there and various other clubs in and around the LA area ever since. Stewart made his television debut in April performing stand up on the show Laughs on Fox.