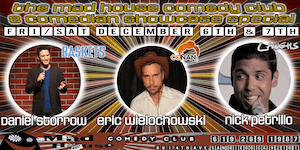 iCal
Google
It's the Famous Mad House Comedy Club Showcase Special with Eric Wielochowski as seen on The Conan O'Brien Show and more!

It's the Famous Mad House Comedy Club Showcase Special with Eric Wielochowski as seen on The Conan O'Brien Show. Nick Petrillo as seen on Laughs on Fox.

Eric Wielo is a stand-up comedian, improviser, and writer originally from Milwaukee, Wisconsin. He's been a member of the CONAN (TBS) production staff for the past eight years and has helped to create over 1200 episodes of television. His TV credits include: Saturday Night Live, The Tonight Show with Jimmy Fallon, Late Night with Seth Meyers, The 75th Annual Golden Globe Awards, The 70th Annual Emmy Awards, The Break with Michelle Wolf, The Tonight Show with Conan O’Brien, The Pete Holmes Show (TBS), Empire's White Hot Christmas Special (FOX), Deon Cole's Black Box (TBS) and Disney's Annual Thanksgiving and Christmas Holiday Specials (ABC). He recently performed on the TBS sponsored Main Stage at the New York Comedy Festival and has also performed in the LA and San Francisco Comedy Festivals. He's a proud graduate of The Second City Conservatory and iOWest's sketch and improv programs.

Daniel Storrow learned at a young age that if you yell something out in class, and everyone laughs, you get in trouble. But you yell something out and the teacher laughs, you're a rockstar. Daniel has entertained crowds throughout the United States and in Jerusalem, Israel. A trained actor and San Diego native, he is known for his quick wit and intelligent musings on everyday life.