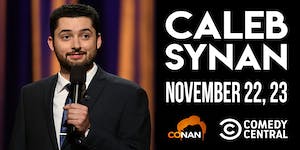 Caleb Synan is one of the hottest young comics in the country. (Funny AND good looking!) His unique background as a preacher’s kid from a small southern town gives him the ability to relate to any and every crowd -- even though he’s a big old millennial who lives in LA. Want proof? He’s written and starred in two different Comedy Central web series: “Deadliest Chef” and “Wise Words” (That’s the internet!) And he’s performed on CONAN (twice!), Last Comic Standing (once!), and Comedy Central Stand Up Featuring Season 2 (your mom saw it on instagram!) He’s also starring in Bill Burr’s upcoming stand up show on Comedy Central in 2020 (wow, this guy does a lot of stand up!)

He’s also entertained our troops in South Korea and Japan. What a guy! It’s no wonder he won the title of "Wittiest" in Franklin County High School’s 2009 Yearbook. He even wrote this bio himself. And he’ll have a margarita with you if you play your cards right.

Omar is a stand-up comedian, writer & performer based in Los Angeles. A graduate of Rice University, he realized shortly after graduating that there are no refunds for college. He moved to LA in 2010 to pursue a career in comedy and quickly became a local favorite performing regularly at many clubs across the city including The Improv, The Comedy Store & The Ice House.

Omar’s comedy is a mix of personal stories and social commentary based on his unique life experiences conveyed with a likability and wit that audiences can’t help but fall in love with. He’s performed in a number of festivals including The 10,000 Laughs Comedy Festival in Minneapolis, MN, The Dallas Comedy Festival, RIOT LA, & CROM Comedy Festival in Toronto.

In addition to stand-up, Omar also co-hosts the Foodie Call podcast on The Nerdist School Network. He has also written, directed, & produced a YouTube web series with fellow comedians called GRINGO and has guest-starred on other web series/sketches featured on Funny or Die and Más Major.