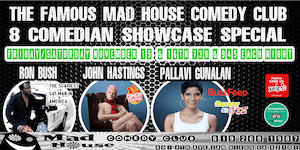 Over the last ten years John Hastings has appeared at every major comedy festival in the world including Edinburgh (2012-2017), Melbourne (2015-2016) and Just for Laughs Montreal. He has told jokes on BBC Radio 4, BBC 1, BBC 3, Comedy Central, CTV Australian Comedy Channel, and CBC The Comedy Network. He is also the COCA Comedian of the Year, a Martin Sims Award Nominee, an Amused Moose Comedy Award winner, and was briefly a viral sensation after Dennis Rodman heckled him in Los Angeles.

​ 'Never any doubt we’re in the hands of an appealing consummate pro.' - Chortle.

Pallavi Gunalan is biomedical engineer, stand-up comedian, improviser, actor, writer, bitch, lover, child, mother. Okay not that last part. Pallavi has performed at festivals and venues all over the world. She loves her dog, and science.

Justin Rivera is a nationally recognized, professional comedian and magician, who has appeared on many, worldwide stages and national television shows. Rivera is currently on a 6-month, sold out international tour in Australia, China, Singapore, Thailand, Malaysia, Philippines, Taiwan, India, Vietnam, Indonesia, and Cambodia with rave reviews and standing ovations.

Justin competed on NBC's "America's Got Talent" hosted by Nick Cannon and was named a judges' favorite by Howard Stern, Howie Mandel, and Sharon Osbourne. He has appeared on "Fast Track to Fame” produced by FOX, on Comedy Central with Dave Attell and Adam Carolla produced by Adam Sandler’s production company in part with Happy Madison Productions, and a special appearance and acting on Discovery shows, as well as, Playboy TV’s syndicated shows.

Justin is an entertainer and magic consultant for the grammy-nominated band OneRepublic----customizing and creating magic art for the popular music video “Love Runs Out” which received many awards, including charity involvement with the Black Eyed Peas.

Justin is known in the comedy circuit as the "Comedian's Magician." He is known for his ability to participate with his audience with an engaging, smart, and witty manner. His performances are entertaining and a guaranteed hit. A seasoned performer, Justin has performed before esteemed public venues such as the Improv, Comedy Store, and Laugh Factory.

Justin's comedic contributions have been showcased within large corporate gatherings at the Consumer Electronic Show (CES). Recently, he has consulted for McDonald's using magic to help brainstorm ideas for new marketing strategies.

Justin has donated his time for international military shows for the Navy, Army, Marines, and the Air Force. Additionally he has raised funds for the Children's Hospital as his personal charity.

Justin's success has him booked within over 100 prestigious venues including locations in Las Vegas, Miami, Manhattan, Los Angeles, etc. well through 2017 and 2018.

Ron Bush is a LA based Comedian, Actor, Writer from Philadelphia. He mixes personal stories mixed with social commentary to make a point. His act has been making him a leading voice among the LA’s LGBTQ comedy community. Ron currently has a show in development with Entertainment One. He tours regularly and performs regularly around town. Follow him for show info and more!

Chris Lev is a stand-up comedian--born in Pittsburgh, raised on the (tree-lined) suburban streets, and now living in Los Angeles. He weaves sarcastic yet conversational comedy, biting criticism, and what pundits have called an "unstoppable whiteness" into a heady pastiche that has made him one of the best up and coming comedians in a 1 mile radius of wherever he currently is.

Will Burkart is an LA based comedian who performs at comedy clubs around the country. Will grew up in the San Francisco Bay Area, and launched his stand-up career in Chicago while training at Second City for improv and acting, which helped him book lead roles in numerous commercials and short films you probably didn't see. Instead, you can actually see Will on stage nightly performing his own brand of infectious storytelling.