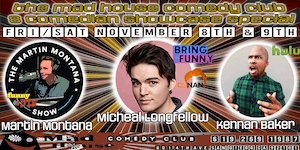 Michael Longfellow is a stand up, writer, and stepson from Phoenix, now based in Los Angeles. While in Arizona, Michael was a regular at the Tempe Improv and Stand Up Live. He also helped run The Big Pine Festival, Arizona's debut comedy festival which now brings great comics from all over the country to Flagstaff every year. Shortly after his move to Los Angeles, he placed 2nd at the Laughing Skull Comedy Festival in Atlanta, was chosen as one of TBS' Comics To Watch, did Stand up on CONAN and can now be seen on Hidden America with Jonah Ray and Bring The Funny on NBC.

Keenan Baker grew up a Military Brat born in San Diego CA, living all around the country but landed back in Los Angeles at a young age. Raised by a single father, Keenan struggled growing up.

Growing up he recounts losing fights and not being let back into the house until he won the fights because that was his father's rule. Keenan got his start in comedy back in 2009. Keenan made his tv debut On Laughs on Fox in November 2016 Keenan's energetic style and story telling brings his real life to the stage and laughter to crowds all over.

Martin Montana is a stand-up comedian, host, & actor who’s quick wit and ability to adapt to any situation has led to him hosting celebrity sports shows, being the voice of Shocktop Beer for over 4 years, and doing stand-up at national sporting events. He also headlines at comedy clubs across the country and his comedy is featured on SiriusXM.

In 2018 he became the host of RENEGADES, a celebrity sports show at Caesars Palace in Las Vegas featuring Jose Canseco, Terrell Owens, and Jim McMahon. In 2014 he began voicing the talking orange slice known as “Wedgehead” for the beer Shock Top in a series of hidden camera unscripted ads. The campaign immediately went viral with over 10 million views, expanding into television commercials for both Canada and the U.S., including a Super Bowl commercial in 2016. The co-creator of the web series "Middle Grown,” Martin has also written and acted in sketches on Funny or Die. He can be heard on SiriusXM satellite radio, was a semi-finalist in NY’s Funniest Stand Up Competition, has been featured in the Boston Comedy Festival, and has even performed at a Washington Nationals baseball game.

Martin began his comedy career in Boston, performing at a bowling alley … showbiz! He then spent several years in New York City and now lives in Los Angeles.

Jeff Bilodeau is a professional stand up comedian based out of San Diego. He has performed for over 5 years at all the major clubs in town and hosts his own weekly show at Winston's in Ocean Beach. He has opened for Pauly Shore, Rob Delaney, Steve Rannizzisi, Joey Diaz, Doug Stanhope, and many more. His quick wit and ability to entertain a wide array of crowds has helped him become the Champion of the San Diego's Funniest Person Contest!