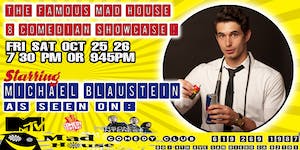 Michael Blaustein is an internationally touring headlining comedian, accomplished actor, and award winning writer. He has performed at over 200 colleges worldwide and has been on the Comedy Central on Campus Tour, The College Humor Tour, and The Oddball Comedy Fest. Michael has preformed at prestigious festivals such as JFL 42 and The New York Comedy Festival. Michael can be seen on this season of CBS’s Person of Interest and has a role in The Lucky Guy, a feature film produced by Spike Lee, out in late 2017. He has hosted two pilots for MTV and was a cast member of the last season of MTV's Punk'd. Michael created and developed a Snapchat show for Comedy Central and has sold ideas to CBS Radio and various other production company's. He was also a comedy pilot finalist in The Austin Film Festival. Michael co-wrote, co-directied, and co-starred in the feature film "Up There" that will be out mid-2018.

Torio Van Grol was first discovered by a gentleman naturalist in 1676, causing an uproar among the clergy, who claimed that he was placed on Earth by God as a test of faith. After much careful study, Torio has been widely accepted as real, though some controversy lingers. Many people believe that early humans coexisted peacefully with him, even caring for him and riding on his back as a form of transportation. But Torio is not strong enough to carry people, instead relying on speed, cunning and a bulletproof eBay rating for survival. ​

Torio recently performed as apart of Comedy Central's Cluster Fest and performs regularly at other comedy festivals, including SF Sketchfest for the past five years.

In 2018, he was listed as one of the Bay Area's best stand-up comedians by SFist. He won the title, "Best Joke of 2017" by the award-winning SF blog Courting Comedy.

Tommy O'Neill is a comedian with an inquisitive and intense comedic style that points out the stupidity in his life. His grumpy rants keep him sounding old and crazy, while his energy keeps him young at heart. Originally from Orlando FL, Tommy is the host of the Bust it Wide Open Podcast featured on iTunes/SoundCloud and is also a writer/director/actor for the award winning production team Pointless Pencil Productions.

You may have seen or heard Tommy from TV’s "The Viral Break-Down", FOX's "Laugh TV", "The Down Low (With James Yon)", Comedy Centrals “Tosh.O”, ComedyCentral.com, or from one of his hundreds of appearances on a iHeart Media radio station. He currently lives in Los Angeles and tours comedy clubs nationally. Life is amazing, but Tommy will still find something to be mad at.

Joe Carl Abousakher grew up in a multi-cultural household (half Palestinian-Arab, half Country Bumpkin-White) in the middle of nowhere (McEwen), Tennessee where he raised sheep and chickens there. He killed a lot of those sheep (for food, not fun), and ate all the unborn babies of those chickens (eggs). Does that sound weird? Screw you, dude. You're weird.

Now he now raises his preteen step daughter in West Hollywood, California, and no - he's not that great at parenting. But he does have a pretty unique perspective on the world, and he's conceited enough to think the world wants to hear him rant about it.

He was a semifinalist on NBC's Stand Up Diversity Showcase in 2016 and 2017, a finalist in The Funniest Comic In LA 2017, and has been a featured act at the 208, Golden Spike, and North Texas comedy festivals. He has featured for the likes of Dana Gould, TJ Miller, and Margaret Cho. He loves performing all around Southern California, but he'd love to travel the country to perform for YOU!

ALSO - Joe hosts THE HOMETOWN HEROES PODCAST - a biweekly podcast where he invites funny people over to talk about the places they grew up. You can find it on iTunes, Stitcher, or anywhere else you listen to those things.