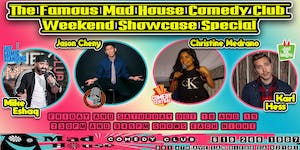 iCal
Google
It's the Famous Mad House Comedy Club Showcase Special with Jason Cheny, Winner - The World Series of Comedy, as seen on HULU and more.

Christine Medrano is a tiny stand up comedian who was born and raised in the cold streets of Winnipeg, Manitoba, and could best be mistaken for a Canadian Dora the Explorer. Her humor is what happens when a mixed race woman grows up in the suburbs while attending 14 years of private Catholic school. Her thoughtful, reflective and self-deprecating comedy is anchored by her boundless energy.

She appears regularly as a crew member on the Youtube show Good Mythical Morning (15 million subscribers) is a featured player and writer for College Humor and Dropout. Her short film which she stars and co- wrote has been screened at Tribeca, Outfest and Outfest Fusion, Frameline, Heartland Indyshorts, and numerous film festivals in the United States and Internationally.

A unique point of view has helped make her a finalist for Sirius XM’s Canada’s Next Top Comic, a feature at the Laughing Skull Comedy Festival, and an opening act for Maria Bamford. She has appeared in numerous videos for Cracked, Buzzfeed, Refinery29, Funny or Die, Comedy Central and All Def Digital, and featured on HBO’s Entre Nos: Part Four in 2018 and in the Wanda Skykes Epix series.

This Friday, 8PM at Bay Bridge Brewing! Mike Eshaq! Mike Eshaq has a unique angle in my comedy being Middle Eastern, raised Muslim and served as a United States Marine. Some of his credits include being on ‘Detroiters’ on Comedy Central and ‘Grace and Frankie’ on Netflix. Also, Mike placed as a finalist in seven out of the eight competitions for The World Series of Comedy!

JESUS SEPULVEDA featured in the Netflix Special Chingo Bling: They Can’t Deport Us All that depicts his life growing up Latino in Southern California. He is also on American Wannabes podcast and is performing at clubs and theatres around the country. His stand-up matches the hilarious sketches that he produces on a weekly basis.