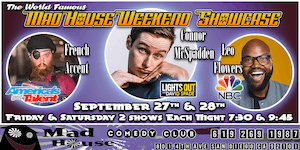 Connor McSpadden is a comedian and writer living in Los Angeles. He hosts the scripted comedy podcast "Mean Boys" on the Starburns Audio network. He's been featured in comedy festivals like Riot LA, The Windsor Comedy Festival, and the Ventura Comedy Competition in which he beat out over 100 other comedians to win in 2016. In 2017 he made his television debut on "Roast Battle" on Comedy Central. In 2018 he was a staff writer for "The Comedy Central Roast of Bruce Willis" and made his return to Roast Battle for its third season. Later in 2018 he made his television stand up debut on TruTVs "Laff Tracks." Connor was also a staff writer on the first season of the upcoming series "Historical Roasts" on Netflix.

Head spinning in a caffeinated fugue, Kevin Bennett once found himself shredding down a Martian ski slope with a thousand irate Nephilim howling in his wake. On the way, he rescued twenty damsels, had lunch, and fully calculated Pi. In close company, he goes by “Bennett,” but he moonlights as an accordion-bearing comedian with an eye-patch and a beret, who goes by “French Accent" (the first initials of Francois Raphael Edgar Norbert Celestine Hebert Absalom Correntine Clement Emmanuel Nathaniel Tellus, IV). He entertains any crowd, be it young, old, clean or "adult". His technique involves regular crowd participation and a musical element with no contemporary parallel.

A Chicago native, Leo Flowers quickly worked his way into major comedy clubs and colleges across the country. His delivery has been described as “smooth and deliberate.” No two shows are ever alike, as he’s always attacking the issues of the day and revealing personal anecdotes. Infusing stand up with storytelling, Flowers captivates audiences of all demographics.

Recently, Flowers appeared on Comics Unleashed with Byron Allen, was a runner-up in the San Francisco International Comedy Competition, and was a finalist in the 2011 Stand Up for Diversity competition. He has toured on the Shaved and Depraved Comedy Tour, and hosted both MTV’s “Sports Blender” and Starz “Staan’ ‘Dup," and was featured on "Last Call from Carson Daly," on NBC!!