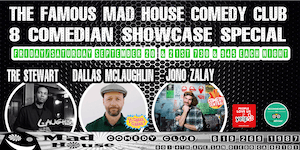 iCal
Google
It's the Famous Mad House Comedy Club Showcase Special with Dallas McLaughlin as seen on Yo Gabba Gabba and more!

It's the Famous Mad House Comedy Club Showcase Special with the Emmy Winner Dallas McLaughlin as seen on Yo Gabba Gabba, the Aqua Bats Super Show and Champion of the San Diego's Funniest Person Contest. Also performing Tre Stewart as seen on Laughs on Fox, Jono Zalay from Comedy Central, Funny or Die, and Amazon. Jordan Doll as seen on Viceland and the Just For Laughs Festival. Daniel Storrow as seen on FX, Animal Planet, and the World Series of Comedy. Plus Mad House Favorites Matin Atrushi and Michael O'Brien.

Dallas got his start in comedy by writing and performing with the award-winning sketch comedy group The Honking Geese. After the groups demise Dallas turned to music and toured the country while releasing three records with the band Bad Credit. Dallas was asked to write and perform for the pilot of Yo! Gabba Gabba! Which, turned into a regular role on the show. Since 2004, Dallas has been performing and writing sketch comedy at the Upright Citizens Brigade Theatre in LA and NY, having recently performed in Jurassic Park the Musical! Dallas joined the ranks of stand up comedy in 2009 and has since been featured on several shows in San Diego, Los Angeles and Las Vegas. Dallas currently writes about Baseball for FanSided.com as well as writes and performs for the all-new The Aquabats! Super Show! on the Hub Network. He likes Italian food.

Tre' Stewart found Comedy pretty early in life. While other kids were watching cartoons he was watching Saturday Night Live, writing jokes and doing impressions preparing himself for his inevitable career in Stand Up Comedy. Tre' first picked up the mic 9 Years ago at the tender age of 16 and never looked back. Stewart possesses a relaxed, laid-back comedic delivery where the punch lines come in more of an intimate and conversational style of someone sharing a funny story over the water cooler at work or on the basketball court. The Detroit Native left the motor city in 2012 to pursue his dreams of performing comedy in Los Angeles. Stewart made his television debut in April performing stand up on the show Laughs on Fox.

Jordan is a standup comedian, writer and actor from Denver, Colorado currently living in Los Angeles. If he looks familiar it may be because you saw him in a couple of commercials or maybe even doing comedy on Viceland's "Flophouse". Or maybe you saw him performing at Just For Laugh's Montreal, or the High Plains comedy festival, or San Francisco Sketch Fest; opening for the likes of TJ Miller, Rory Scovel or Brian Posehn. No? That's cool, his tour schedule is right here on the front page so you never have to miss another show! Still not enough? Go ahead and follow his ever deepening social media addictions by clicking the buttons below. STILL NOT ENOUGH!?!?!? Well sorry... that's really about it...