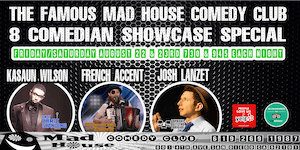 New Jersey is the hometown of one of the brightest, up-and-coming stars in the country. Mr. Kasaun Wilson is a stand-up comedian who has been touring colleges, churches, and theaters all around the country. While earning his Bachelor of Fine Arts in Acting from the historic Howard University (THE MECCA) in Washington, DC, Kasaun Wilson started an acting and stand-up comedy career that is still garnering him national attention today. He won DC Improv’s Funniest College Student competition representing Howard University, has opened up for some of this country’s greatest acts including Grammy Award Winner, Tye Tribbett, Greg Proops (Whose Line is it Anyway?), Gary Owen (Tyler Perry’s House of Payne and Think Like a Man) and featured for Donnell Rawlings (Chappelle’s Show), and has also been highlighted in the Washington Post for his acting work on “Sanctified” at the Lincoln Theater and “Standing on the Edge” in the DC Black Theatre Festival. Known for his quick wit and setting himself apart for being one of the country’s brightest clean comedians, Kasaun has featured in some of this country’s greatest venues including the DC Improv, the UniverSoul Circus, The Ohio State University, the Stand-Up NY Comedy Club, and the world famous Comedy Store in Los Angeles, CA to name a few. All of these great shows led to Kasaun being featured on NBC’s Last Comic Standing Season 9 starting on July 22, 2015. Whether it is on the silver screen, the theater stage, or with a mic in his hand, look out for Howard University’s own Mr. Kasaun Wilson.

Head spinning in a caffeinated fugue, Kevin Bennett once found himself shredding down a Martian ski-slope with a thousand irate Nephilim howling in his wake.

Silly bio, but watch his America's Got Talent Video below.

Josh Lanzet is a Los Angeles-based comedic writer and performer whose credits include a sold-out run of his original two-person play, “Dating; Adults Embracing Failure,” a one-man show “Do You Want a Sandwich? The Romantic Missteps of Josh Lanzet,” and a two-year run with the acclaimed Chicago musical sketch comedy show “Cupid Has a Heart On.”

Josh starred in “Oh Henry,” an independent television pilot, and played a recurring role in the pilot “The C Word.” Josh has studied at UCB, Second City, iO, The Annoyance Theatre, and the Brave New Workshop.