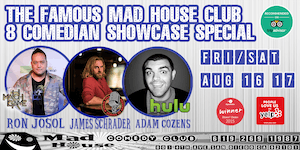 Ron Josol represents the new generation of comedy. With his modish comedy style and commanding stage presence, he is one of the hottest acts today.

He performs regularly in Canada, the United States, the Pacific Islands, the Persian Gulf, Asia, Central America, the Caribbean, and the Middle East.

In the states Ron has perfomed on Gotham Comedy Live, The Match Game, Last Call with Carson Daly, Comedy Now and more!

Thought by some, but not all, members of his immediate family to be one of the best stand up comedians working today, Adam Cozens is a thoughtful and engaging comedy talent who has been heralded by his peers as one of the best joke writers on the scene today.

A Seattle native, Adam Cozens is a recent Los Angeles transplant after previously establishing himself for a half-decade in the rough & tumble New York comedy community. Much like the city that he came up in, Adam’s comedy is an eclectic melting-pot consisting of everything from hilarious one-liners to personal heartfelt stories to bizarre and sometimes sarcastic views on his upbringing and the world today.

In 2018, Dry Bar Comedy released Adam’s first one hour stand up comedy special “Anyway…Here’s Adam Cozens” which amassed over 1 million sample views in the first week. Previously his stand up had been featured on Nickelodeon’s “NickMom,” Hulu’s “West Coast Funnies” “Tell Your Friends: The Concert Film,” “The CoExist Comedy Tour” documentary, “ComedyTime,” as well as heard worldwide on Sirius|XM Radio. An an actor, he’s been seen on IFC’s “The Birthday Boys,” HBO’s “Got No Game,“ TBS’s “Lopez Tonight,” and dozens of original comedy shorts on “America’s Funniest Home Videos” digital platform.

Off-stage, Adam is an award-winning writer, who holds claim to being a two-time nationally published author and in 2006 won the CBI Award for Best Entertainment Radio Program for which he served as both host & head writer. Adam also serves as a contributing writer for Saturday Night Live’s “Weekend Update,” worked as a writer on MTV’s “Ridiculousness” and his jokes have been featured on Comedy Central’s Tosh.O, @Midnight and such popular websites as TheChive, SomeECards, Buzzfeed, Reddit, eBaums World and more.

In addition to his own headlining dates, Adam has had the honored to serve as the requested opening act for Gary Gulman, Andy Kindler, Greg Behrendt, The Sklar Brothers, Judah Friedlander Joe Machi, Jeff Caldwell, Christian Finnegan, Ian Bagg, Michael Palascak, Joe Bolster and more. Additionally, Adam has been hand-selected by venues to open shows for comedy greats like Paul Reiser, Kevin Pollack and Nick DiPaolo.

James Schrader is a human, comic, writer, actor, sailor, pilot, father and friend. In 2017 he won the San Diego Funniest Person Contest and had a daughter. In 2018 James won 2nd Place at the World Series of Comedy. And just for fun In 2016 he sailed 1100nm from La Paz Mexico to San Diego on a 38’ Hans Christian. His adventurous, mischievous and inquisitive observations of the human experience guide audiences through the ups, downs and norms of life on this planet.

James’ first standup performance was at age 12 during a school assembly of over 150 classmates. He was involved in Community Theater all through his teen years and performed standup again in college. While in college at the University of Central Florida he was a member of the Small Coed Cheerleading squad that placed 2nd in the UCA National Championships in Orlando, FL in 2001. After college he was the COO of a family construction company in Tampa for 9 years. Around this time he also got his pilot’s license and sailed performance catamarans off the Florida coast. He started studying improv and began writing sketch and standup in 2011. In 2012 he moved from Florida to San Diego to pursue comedy fulltime and quickly became a featured performer at The La Jolla Comedy Store, The American Comedy Co, The Mad House Comedy Club and The Comedy Palace. He has opened for Al Madrigal, Tom Rhodes, Pablo Francisco, Doug Stanhope, Fortune Feimster, Steve Rannazzisi, Joey "Coco" Diaz and many more around the country.