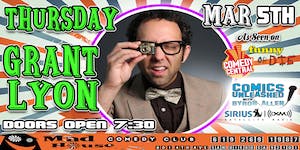 Described by San Francisco Weekly as "a hilariously sharp observer, not one of those tired white-guy bellyachers," Grant was once a collegiate soccer player. He decided to pursue a career on stage instead of on the field, and that decision's been rewarded by being chosen as a New Face in comedy at the Just For Laughs Festival, winning the Laughing Skull Comedy Festival, and being a finalist in the Big Sky Festival. He plays a fun role in the second season of The Comedy Central show "Corporate" and stars in the feature film Killer Kate on Amazon Prime! As well as performing in a number of other prestigious comedy festivals including The Great American Comedy Festival, Bumbershoot Music & Arts Festival, and the Bridgetown Comedy Festival, Grant's performed on the TV show Comics Unleashed. He has appeared on the nationally syndicated Bob and Tom Radio Show, is heard regularly on Sirius/XM satellite radio, and has been a guest on numerous popular podcasts including Doug Loves Movies. As well as being a contributing writer for the Huffington Post, the film he wrote and starred in, Interview Date, was eligible for a short film Academy Award. Funny or Die, MSN, Huffington Post, and others are among the sites that have featured Grant's sketch videos on their home pages. You might also recognize him from a number of national commercials including AT&T, Johnsonville Sausage, CiCi's Pizza, and more.