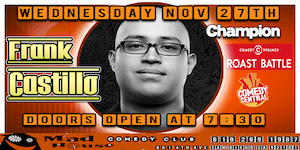 Frank is most recently the Winner of ROAST BATTLE 2 War of the words. He is the Peoples Champ.

Frank Castillo was born and raised in east-side San Jose, California. He began his comedy career as a host and sketch writer for Pechanga Resort and Casino in Temecula, California. Today, he resides in Los Angeles with his girlfriend and cat.

Since beginning stand-up comedy over 6 years ago, he has been able to perform across California and work with comedians such as Steve Trevino, Adam Ray and Dave Chappelle. He works and frequently performs at the World Famous Comedy Store, his home-away-from-home, where he shares the stage with his favorite comedians Louis C.K., Bill Burr, Joe Rogan and Tom Segura.

Frank has been a co-producer and Roaster for Roast Battle since it began as a small, late night open mic 4 years ago. He is thrilled to be able to be a part of Comedy Central’s vision of the show he loves so much.