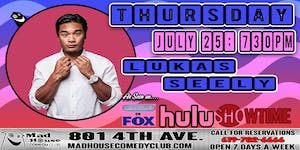 Lukas Seely started comedy back in his hometown of Billings, MT before relocating to Seattle,WA in 2004. Lukas soon became a crowd favorite in Seattle Comedy scene and had since moved to Los Angeles, California where he regularly performs at The Hollywood Improv, The Comedy Store and many other venues.

​The comedic poise he brings to the stage is impressive. His contagious laugh makes audiences feel as if they were sitting at home in front of the fire place. His hilarious stories about his life in a country city and other life experiences make his performance a knock out punch.

​ Lukas performed his stand-up on FOX's "Laughs," and Showtime's "Louie Anderson Presents" currently on Hulu.com. His cooking skills were on display on TNT's "On The Menu" with Emeril Lagasse.

For the 2015 NFL season his is the 49ers Official Goofy Weather Man for the Series " The Faithful Forecast." on 49ers Studio.

​Lukas Seely is rising star you must catch!