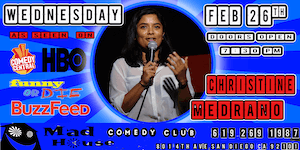 Christine Medrano is a stand up comic, actress and writer, from Winnipeg Manitoba, Canada. Her short film, which she stars and co-wrote screened at the Tribeca Film Festival and numerous other festivals around the world. She has appeared on HBO's stand up series Entre Nos and in the Epix Stand up series Unprotected Sets. She is a crew member of the popular Youtube Channel, Good Mythical Morning, which has 16 million subscribers and is a featured cast member and writer for College Humor.

Christine has also been a finalist for Sirius XM’s Canada’s Next Top Comic, a feature at the Laughing Skull Comedy Festival, and an opening act for Maria Bamford. She has appeared in numerous videos for Cracked, Buzzfeed, Refinery29, Funny or Die, Comedy Central and All Def Digital.