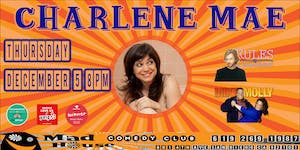 iCal
Google
Charlene Mae as seen on Mike and Molly, Rules of Engagement and more!

Charlene Mae is a prolific Stand-up Comedian & Actress with a life-long passion for making people laugh. She may be cute, but don’t let that charming exterior fool you. Charlene is edgy without offending. Hailing from the small mill-town of Lawrence, Massachusetts, she was the big sister to four other siblings and the daughter of a Pipe-fitter father and stay-at-home mother. Upon high school graduation, Charlene immersed herself in the world of stand-up comedy in Boston, Massachusetts. She then married and moved to Georgia, working in television, all while touring as a Comedian. Charlene’s off-again, on-again romance with stand-up comedy may have lasted over a twenty years, but when her marriage came to an end in 2010, she put her all into comedy. While the hard work paid off, it’s Charlene’s vulnerable and honest comedic approach that really made her stand out in the industry.

Currently, she is touring with Disney’s “LabRat’s” Comedian Hal Sparks.

As well as Nickelodeon and Disney