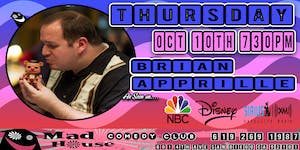 A professional stand-up comedian since 1997, Brian Apprille has performed all over the country making people laugh at casinos, clubs, colleges, conventions, and other events. In 2009, developed facial paralysis as a result from a rare disease called Ramsay Hunt Syndrome. He returned to the stage determined to pursue his dreams and to help raise awareness for facial paralysis, and laughter and hope to those who suffer from it.

Critics call him, "brilliantly entertaining," and "coast-to-coast funny!" He blends his material with a variety of over 100+ impressions, resulting in a performance that has been called "a spectacular exhibition of high-energy comedy" that both entertains and inspires!

Brian has shared the stage with some of comedy’s biggest names, and was the winner of the 2016 Clean Comedy Challenge, and has been featured on AOL's COMEDY SPOTLIGHT, SprintTV, and has appeared on NBC, and in Disney's hit movie THE GAME PLAN.