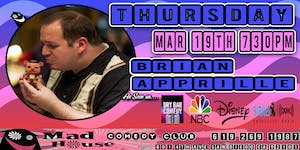 Brian Apprille is a stand-up comedian, voice actor and motivational speaker who performs across America for comedy clubs, businesses, churches, and any audience who wants to laugh or hear an inspiring story.

Brian, a clean comic, has shared the stage with some of comedy’s biggest names and appeared on NBC, Sprint TV and AOL’s “Comedy Spotlight.” He is also the winner of the 2016 Clean Comedy Festival and the 2019 CCA Comedy Contest. Critics describe him as “brilliantly entertaining,” and “coast-to-coast funny!” Brian is best known for his high-energy comedy and impressions; he has been dubbed “The Man with A Thousand Voices” and throughout his performances slips between Homer Simpson, Peter Griffin, Alan Rickman and hundreds of other characters both real-life and animated.

Brian’s career took a turn for the serious in 2009 when he developed facial paralysis as a result of a rare disease called Ramsay Hunt Syndrome. He found humor in the midst of his challenges and got back on the stage after over a year of fighting Ramsay Hunt Syndrome’s debilitating symptoms.

Now an activist and a comic at once, Brian raises awareness of facial paralysis and inspires hope in fellow suffers with plenty of belly-laugh healing along the way. He founded San Diego’s first facial paralysis support group and has appeared on NBC’s Inspiring San Diego to share his story. You can listen to the stories of notable facial paralysis survivors like Mary Jo Buttafuoco and WWE Hall of Famer Jim Ross on Brian’s podcast, Unique Smiles: The Facial Paralysis Podcast.

Brian now gives inspirational speeches to corporate, church and a variety of other audiences all over the country. He owns a comedy company, Encore Comedy, headquartered in San Diego, California.