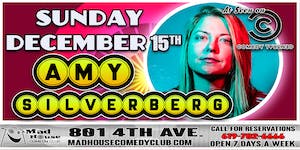 iCal
Google
Amy Silverberg as seen on Comedy Central and the Just For Laughs Festival!

Amy Silverberg is a writer and stand-up comedian based in Los Angeles.

She's currently a Doctoral fellow in Fiction at the University of Southern California, where she teaches. Her short stories have appeared in various magazines, as well as the anthology Best American Short Stories 2018 edited by Roxane Gay. She's currently at work on a collection of short stories and a novel.

Amy was a New Face at the Just For Laughs Comedy Festival in Montreal in 2018. You can watch her on "Inside Joke with Asif Ali" on Amazon Prime. She also has a set on Comedy Dynamic's "Coming to the Stage" available on Pluto TV. She co-hosts three monthly stand-up shows: "What Now?" at The Hollywood Improv Lab, "Bitchface Comedy" in Pasadena, and "Wolf Den" in Silverlake.

Most importantly, she was once a contestant on Wheel of Fortune, during which she correctly guessed the phrase "He's Just Not That Into You" but still didn't win.